Home Facebook for WordPress. FREE DOWNLOAD: Plugin / Widget with RSS counters, Twitter , Facebook for...
Share on Facebook
Tweet on Twitter
So you want to learn how to create your own widget for WordPress ? In fact it is not so difficult and so can be quickly implemented in your blog through so famous functions.php file located in your theme folder. To help you explain , we have created a widget that counts the numbers of your social networks like the one we have here in the School WordPress and can be installed in the form of plugin . The link to download is at the bottom of this article .

After installing the widget , this is their appearance in the sidebar :
NOTE: Pay special attention to the fact that the plugin is responsive, that is, if the sidebar of your template is wider, all counters will appear side-by-side as happens here in WordPress School. If your sidebar is even smaller, it will put all the counters in a vertical format, and so on for the different sidebars of blogs, not requiring you to do any kind of change!
Liked? So come forward and try to learn how to do this and other Widgets for us and we can even share with others. I want to make first around quite clear: since we have to deal with PHP and HTML code and the focus of this tutorial is to create widgets for WordPress, we assume that:
You have some basic knowledge of HTML and PHP or at least tried to do a script. Not in the scope of this tutorial to explain what is the echo function or how to start an object of a class. For this there are several resources on the internet, one of the W3Schools is a portal where you can learn all about programming for the internet including PHP, HTML, SQL and CSS.
You know what it is and where the functions.php file of your theme and at least have opened and edited something in it.
If you do not know even what is a widget, the following section is able to give you some lights. 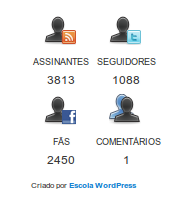 WHAT IS A WIDGET

How to Generate Leads Marketing in critical year high?

performance management in the digital age